“You need not be a Christian to build house, feed the hungry, or heal the sick.  There is only one thing the world cannot do.  It cannot offer grace.”
– Gordan MacDonald as stated in Philip Yancey’s What ‘s So Amazing About Grace?

WHEN A PRODIGAL RETURNS HOME

If you have been a reader here for long, you might already know some of our adoption story

It’s been a challenging, and fulfilling, road in a lot of ways.

The recent challenge was when our 15 year old got into some trouble and decided that running away would be the answer to his problems.

Obviously, it’s a nightmare not knowing where your child is; wondering if they are safe.

Thankfully, he willing returned to school 24 hours later, looking tired and worn out.

The school contacted us to see what we wanted to do.  Do we want to pick him up now or wait until after school? 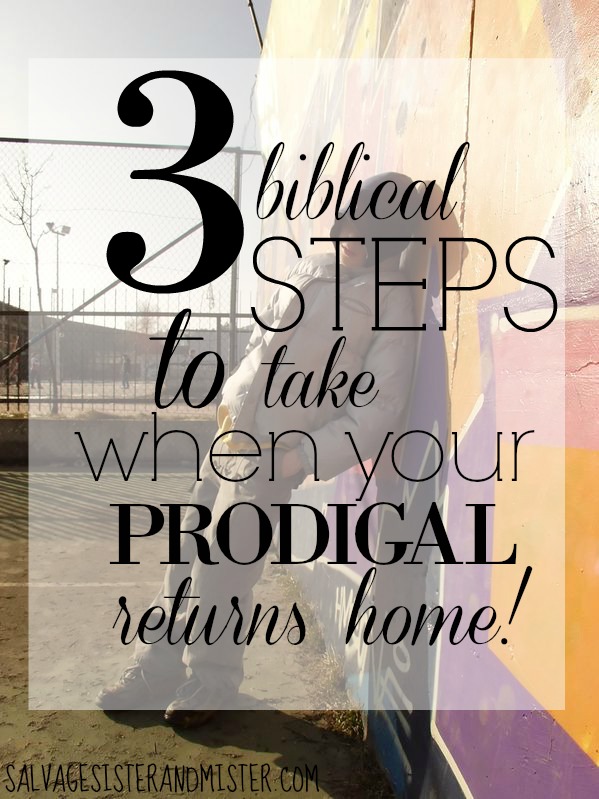 WHAT TO DO WHEN A PRODIGAL RETURNS?

After The Mister and I talked about it, we decided that we would give him a little time to deal with issues he had there and go see him at lunch.  We also didn’t want to scare him off.

When we went to see him, we all embraced.

“But while he was still a long way his father saw him and was filled with compassion for him, he ran to his son threw his arms around him and kissed him.”

What’s interesting about this passage is, the only thing the son did was come home.  He hadn’t made his confession or any promises yet.  The father just wanted to see his son was alive and well.

In the parable (story), the son then confesses to his dad and yet the father doesn’t talk about what he should have done, what the rules will be in the future, or any of the heartache he experienced.

“But the father said to his servants, ‘Quick! Bring the best robe and put it on him.  Put a ring on his finger and sandals on his feet.  Bring the fattened calf and kill it.  Lets have a feast and celebrate.  For this son of mine was dead and is alive again; he was lost and is found.”

We decided this would be the “fatted calf” moment …we would take him his favorite meal.  Of course, there is a little nagging in the back of your mind that wonders if you are rewarding this negative behavior.  But the realities are…would a kid go and runaway for fast food?  Probably not.  Running away is generally a decision made in fear.  But in either case, we decided to try and follow the principles laid out in this parable – as this is how our Heavenly Father shows us love.

The next part of the story/parable must deal with the new rules, where he can and can’t go, and /or how the son never disobeyed again.

Not even close.  Actually it deals with the other son who has bitterness in his heart celebrating his brother’s disobedience and not his own loyalty to his father.

“My son, the father said, ‘you are always with me, and everything I have is yours.  But we had to celebrate and be glad, because this brother of yours was dead and is alive again; he was lost and is found.”

We never learn if the son “sinned no more” (isn’t that interesting?), but we did learn how to handle when a prodigal returns:

Of course, rules, counseling, and boundaries are part of our story but for now:

WE ARE REJOICING; OUR SON WAS LOST AND IS NOW FOUND!

**This is our personal story and how we dealt with our situation.  Of course, every family is different.  If you need more information on dealing with a teen running away, look to your local community for professional help.   Here are some additional resources:

Why Do Kids Run Away

This site uses Akismet to reduce spam. Learn how your comment data is processed.

Our desire is to share practical ways to "make the most" no matter what we have - Good Stewards.

We are excited you are joining us on this journey to use our resources wisely.

Stay up to date

Don't miss all the latest!

The images, tutorials and content on salvagesisterandmister.com are protected by copyright laws. DO NOT distribute or copy the content or share multiple images (including collage images) without written permission. DO NOT edit, crop, or remove watermarks from any image. For questions contact us at salvagesista@gmail.com

Salvage Sister & Mister is a participant in the Amazon Services LLC Associates Program, an affiliate advertising program designed to provide a means for sites to earn fees by linking to Amazon.com and affiliated sites.